​​​​Meet the members of Take Two

Carrie grew up in Michigan and moved to Chicago after earning her Bachelor of Music degree in college.  Her vocal styles include musical theatre, opera, and vocal jazz.  She has performed at Busch Gardens- Williamsburg (VA) and on the Spirit of Chicago.  Currently she is Director of Music and Liturgy at St. Scholastica Church in Woodridge and Music Director of the West Towns Barbershop Chorus.

Listen to the Take Two CD

Leslie grew up in Palatine, where she discovered her love of music and dance.  After attending the American Musical & Dramatic Academy in New York, Leslie performed in many musicals.  Her career took her all the way to Holland where she founded the female singing group, Route 66.  When Leslie moved back to the U.S., she brought Route 66 to the Chicagoland area where they quickly became Chicago’s favorite female a cappella quartet.  Leslie currently makes her living doing voiceovers for commercials and corporate videos, as well as narrating children's books. 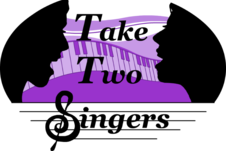